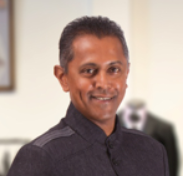 Hailed as a respected professional in Sri Lankan tourism, Hiran Cooray contributes an immense mixture of passion, honesty, integrity and tenacity to the industry. Carrying on the legacy of his father, the late Herbert Cooray, Hiran is the current Chairman of Jetwing - a family owned company which counts a storied history of over 4 decades. His achievements are numerous and much acclaimed, being educated at the prestigious St. Joseph’s in Colombo and going on to graduate from the University of North Carolina and having followed a General Mangers course at Cornell University. Hiran has been Chairman of PATA Sri Lanka Chapter (2003/4), represented Sri Lanka on the Board of Directors of the Pacific Asia Travel Association (PATA) (2010/12), President of the Tourist Hotels Association of Sri Lanka (2005/8); and was appointed an Alternate Member of the UNWTO – World Committee on Tourism Ethics 2013-2017. Hiran is currently the imMediate past president after serving for the second term as President of Tourist Hotels Association of Sri Lanka 2014-2016.

In addition, he holds over 50 directorships in various hotels and related companies – making him a much sought after speaker/panelist at tourism related international forums.