WEDNESDAY, 21ST JUNE 2017, COLOMBO: In a recent press conference held in Colombo, The Hotels Association of Sri Lanka (THASL) announced their first ever island-wide competition to adjudge the most outstanding personalities amongst the youth in the hospitality industry. The press conference was held in the presence of the President and the organizing committee of THASL. ‘Rising Star of Hospitality 2017’ Trophy was unveiled at the press conference in conjunction with the re-launch of the official website of The Hotels Association of Sri Lanka.

Young employees from 200 member hotels island-wide will vie for the coveted title under nine disciplines, where they will be evaluated based on outstanding capabilities, talents and personality traits by an expert panel of professionals.

Commenting on the matter, President of The Hotels Association of Sri Lanka Mr. Sanath Ukwatte said, “Today, the country has 22,000 star class hotel rooms in the formal sector and is expected to grow by a further 6500 rooms by 2020. At present, the total investment is over US$ 3 billion and it is expected to further increase by US$ 1.5 billion by 2020. This by far is the highest investment any single sector has made in the country. Furthermore, the net earnings from tourist arrivals have now exceeded US$ 3.5 billion and unlike other export industries the money earned remains within the country.”

Elaborating further Mr. Ukwatte added, “Tourism is a highly lucrative industry for the country as it not only generates large direct and indirect employment but also attracts substantial investment, helping the country to earn much needed foreign exchange. Despite the attractive attributes offered by the industry, today's youth are unaware of the true potential in the hotel sector. For the first time in our industry, we have decided to identify and give due recognition to these young stars. THASL Rising Star Award is an idea born out of that thinking and the entire industry is excited and looking forward to this grand event which is scheduled to take place on the 24th of October at the BMICH.”

The Rising Star of Hospitality competition is exclusively aimed at the youth between 18 to 27 years of age and will be held in three phases. The first phase will evaluate job-oriented skills and competencies, and will be held at a regional level. The second phase will evaluate the applicants based on the details provided in their respective candidate application forms. The third and final phase will further evaluate the contestants based on reviews obtained from the preceding rounds, following which the top scorers will be further scrutinized through a one-on-one interview.

Top scorers of the competition will be adjudged the winner, first runner up and second runner up under nine different categories namely – Concierge / Bell Hop, Receptionist, Public Area Attendant, Room Attendant, Steward / Waiter, Kitchen Steward, Bartender, Pool Attendant / Life Guard and Telephone Operator. Candidates who qualify from the first and second rounds will receive a maximum score of 35% each, whereupon 45 contestants will be qualified to face the finals. The Rising Star of Hospitality 2017 will also confer a special award for the Most Popular Finalist out of the 45 finalists qualified following the first and second rounds of the competition. The winner of the Most Popular Finalist will be determined through a SMS voting round.

The president and other members of The Hotels Association of Sri Lanka lighting the innovatively designed oil lamp which represented the 9 disciplines that will be awarded at the Rising Star 2017 competition. 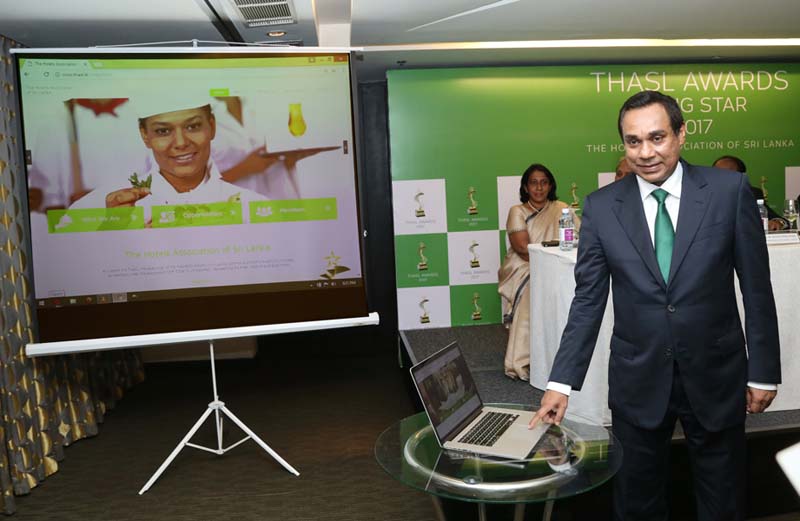 Mr. Sanath Ukwatte, President of The Hotels association of Sri Lanka launching the new THASL website at the press conference