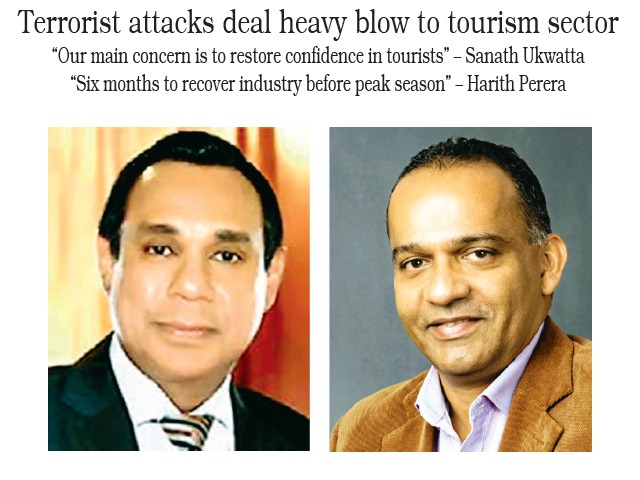 The recent explosions at three five-star hotels in Colombo delivered a sudden shock to the tourism industry in Sri Lanka, creating uncertainty about the industry’s future in the coming months as the tourist death toll rose above 30.

“The Government is to be blamed for their miscommunication and not taking the necessary precautions, even after getting information about these explosions,” said Sri Lanka Hotel Association President, Sanath Ukwatta, presenting his views to Ceylon Today on the recent attacks targeting hotels and Churches in Sri Lanka. He also said there will be a fall in the industry and our main concern should be to re-establish the confidence tourists once had in Sri Lanka, making the country a safer place for them to travel. “We cannot do this alone; we need Government support for this.”

Ukwatta further added that this incident would affect the future expansion of the industry in the country, as many have cancelled their stays and are returning to their countries, while even some future stays have been cancelled. “We are going to refund their money,” he said.

And responding to a question raised, he also added, the Sri Lanka Tourism Development Authority (SLTDA) is currently taking care of the tourists who are victims of the attacks and making sure they are under good care.

Further, criticising the Defence Secretary’s statement that hotels had to look after their own security, Ukwatta said that all hotels could have avoided this tragedy if they had been informed earlier, adding that the Government is to be blamed for not taking these precautions. He also added that hotel security officers do not have the required equipment or training to handle such incidents, stating, “If they knew such things would happen, they should have given that training to the hotel staff.”

When asked whether the attacks would affect the number of locals visiting hotels – which is the norm, as this is the start of the off-season – Ukwatte said that he was not quite sure about it and that the Government should pay attention to create safe grounds not only for tourists, but also for the general public. “They should create this confidence in every citizen in Sri Lanka to visit their churches and walk on the roads with no fear,” he stated.

Along with the hustle and bustle of tours being cancelled, Ceylon Today also inquired about the impact of this attack on tourist visits to the country from Sri Lanka Association of Inbound Tour Operators (SLAITO) President, Harith Perera. According to him, there is an impact on tour operators and travel agencies, as a few tours have been cancelled; not only from the countries of the victims of the recent attack, but overall.

Perera added that they could still have hope, as the industry has six months to recover from this plight until the winter season arrives, which is the peak season of the industry. “So within this time we are trying our best to make the mindset of the tourists, recover the industry, and make Sri Lanka a safer place to travel,” Perera said.