Easter Sunday Attacks the fallout on Tourism The Road to Recovery 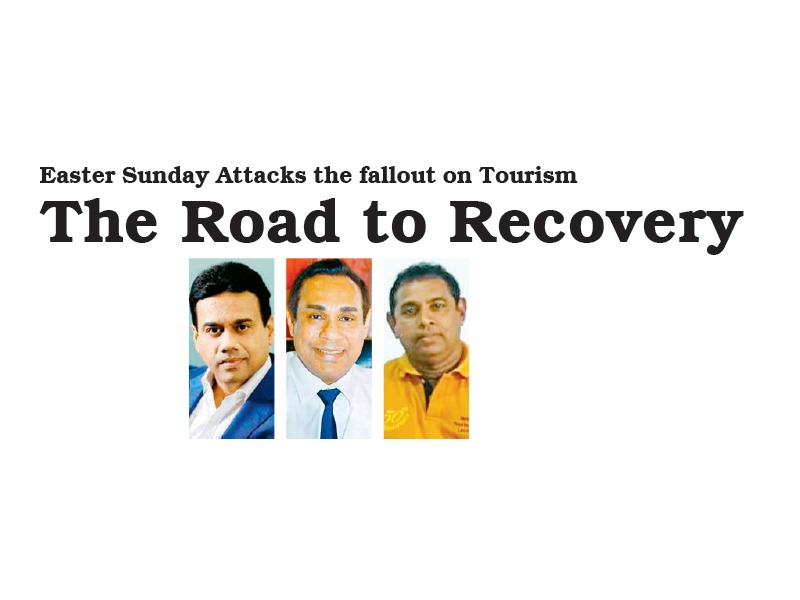 Last Easter Sunday was a devastating affair for Sri Lanka. After 10 years of relative peace with the end of the civil war, once again Sri Lankans have been reduced to a constant state of fear, in the wake of the suicide attacks that took place in several five-star hotels and churches in the island.

Whilst these attacks did ample damage to the everyday lives of people, it also disrupted the tourism industry, which is the third largest foreign exchange earner in the country.

According to Sri Lanka Tourism Development Authority (SLTDA) 38 tourists have died due to the suicide bombs that were blasted in Shangri-La Hotel, Cinnamon Grand, and The Kingsbury Hotel in Colombo.

Speaking with Ceylon Today the Chairman of the SLTDA, Kishu Gomes elaborated on the situation at hand.

"We have 38 tourist deaths recorded and the number of patients receiving treatment at the hospitals has now gone down to 6, and their condition is stable. We are doing everything possible to help the families of the deceased, picking up where necessary in terms of compensation for their travel costs, accommodation costs and so on", he added.

The SLTDA is also facilitating with the Foreign Ministry to ensure that the relatives of the deceased receive the best attention.

"It's the Ministry of Foreign Affairs that's taking the lead in liaising with the families because they are closest to the missions and we play a supportive role. But we have assigned people for each of these activities. We have an emergency response team manned by senior officials working 24 hours for tourists to take care of their needs," he added.

Gomes further added that the SLTDA is also working with the three affected hotels.

"We have assigned officials to those hotels for liaison, coordination, and support needed. The Kingsbury and Cinnamon Grand are currently in operation. Shangri-La said that they don’t know when they can be back in operation. We are also conducting a security briefing for hotels, using army intelligence unit officers and bomb squad officers. In order to create awareness among the tourism sector", he added.

The SLDTA also provides status updates of the situation on ground to Sri Lankan missions, and has deployed officials at the airport arrival, for further coordination.

"We are working with all other stakeholders to see what other support they need. We have the hotline 1912, which is a 24-hour hotline where people can direct any inquiries, complaints and so on. We have also deployed people at the airport arrival, to coordinate their transport and accommodation. If somebody comes to Sri Lanka and they have no accommodation, at our cost we can even house them in two hotels near the airport. The SLTDA is also liaising with the Airport & Aviation Services Sri Lanka Ltd., to ensure that they take care of the tourists, in the best possible manner. After the situation has stabilised, we will soon be embarking on a Public Relations campaign to tell the world who we are, and what the current situation is in an effort to rebuild the confidence", he added.

Meanwhile, speaking with Ceylon Today the President of The Hotels Association of Sri Lanka (THASL), Sanath Ukwatte, said that they roughly estimate that the loss to the tourism sector resulting from Easter Sunday’s attacks would amount to about USD 1.5 billion.

"This is the first time that tourist hotels have been targeted in Sri Lanka, so we can't say how much this will affect the hotel industry. But we have estimated that there might be roughly around USD 1.5 billion loss this year because of this.

There are booking cancellations and travel advisories being updated. But we expect the situation to improve soon after things stabilise", he added.

However, Ukwatte added that whilst the tourism industry is the quickest to drop in an event such as this, it is also the fastest to recover.

"Right now, we’re in the off season anyway. In the travel industry, when something happens the drop is very fast and immediate, but the growth and the recovery is also very fast.

When some disaster strikes the first to suffer is tourism, but it recovers just as fast. What we have now in Sri Lanka is primarily a security issue, so once the security improves and the government rounds up these terrorists, this will diffuse very quickly", he added.

He further said that there is no paralysis within the tourism industry, as Sri Lanka has a healthy local tourism market as well.

"If you look at countries where this has happened before, from Bali to Egypt to Turkey where terrorists have targeted tourists, these countries have bounced back. We also have a huge local market, so the hotel industry will go on and there won’t be a paralysis.

It's just that we won't be up to the full potential right now because of this crisis. But we hope once the security situation improves, the travel advisories from other countries will also be softened, and tourists will start coming in”.

Ukwatte also commended the efforts taken by the SLTDA to address this issue. However, he added that SLTDA could improve its touch point at the Bandaranaike International Airport.

"If at all, the SLTDA needs improve their work at the airport. This is because of the new security arrangements, but I hope this is only temporary.

Many travellers who are going to the airport have to go through lots of inconveniences. But we hope the SLTDA can facilitate and enhance these touch points and attend to their needs to expedite this more.

Because getting to the airport it takes over two hours, from there you have to stop. You can’t take any vehicles to the departure porch. SLTDA can try to ease some of these bottlenecks without compromising on security. This is something we expect them to do", he added.

Meanwhile, the President of Sri Lanka Institute of National Tourist Guide Lecturers, Mahinda Brandigampola, said that around 20 per cent of the bookings for August and September have been cancelled.

"Towards April/May we anyway have the off-season as most tourists come during the winter time in their countries. In the summer, sometimes they come to Sri Lanka during the months of August and September with the Kandy Perahera and all.

These bookings have been cancelled however, by about 20 per cent so far. This isn’t a lot, but it’s still significant", he added.

Brandigampola also felt that the SLTDA and hoteliers alike could have done more to retain the tourists who left the country after the incident.

After the attacks the authorities and the hotels could have done certain things to retain the tourists who left the country out of fear.

Obviously, the hotels that were directly affected would have to check out their guests, but in other hotels, when tourists were checking out due to this issue, the hotels could have reassured them with a refund, a free complimentary stay, or even a free airport transfer if they were to go later.

The SLTDA did this back when the BIA was hit by terrorists; the BIA was attacked in 2001. But none of that happened this time", he added.

He emphasised that the SLTDA and the media alike could have highlighted the positive aspects of Sri Lanka that still remained intact.

"Everyone is highlighting blasts, whilst obviously these attacks can’t be taken lightly, there’s nothing about anything positive. Because, there are still tourists in Sri Lanka in Pasikudah, Sigiriya and our other tourist hotspots, who believe we have something more to offer.

Nevertheless, no media showed this, they are still showing the destruction. The SLTDA could have at least commented about this side to the media, but so far there is nothing.

Right after the day those extremists hit Colombo, I took my clients to Sigiriya and Polonnaruwa where there were other tourists too. They should show that side too, and not just the attacks. Even the BBC and CNN are only showing the attacks, but they are foreign media. Sri Lanka as a country should highlight about the positive things that are still intact even after this dreadful event, if we want to retain tourists”, he added.

The above concerns are quite valid if Sri Lanka's economy is to recover from the Easter Sunday's attacks.

Whilst hardly any recognition has been given to the many positives of Sri Lanka by local media and authorities alike during this difficult time, the out pouring of support has been flowing in to Sri Lanka by foreign nationals on social media under #beautifulSriLanka.

Therefore, it is crucial that responsible authorities look into these concerns if Sri Lanka’s tourism sector is to make a full recovery by the end of 2019.